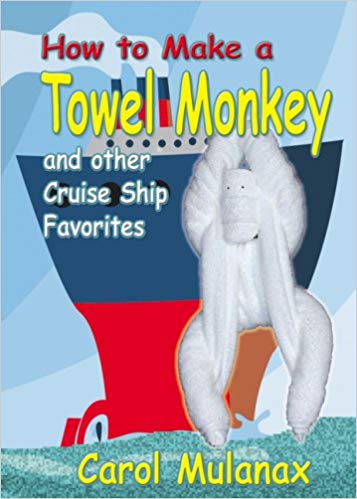 How to Make a Towel Monkey and other Cruise Ship Favorites

One of the worlds greatest mysteries finally revealed.

There are many things that keep me up at night… the mysteries entangled within the Bermuda Triangle, the DaVinci Code, and the sock missing from the washing machine… the secret of the towel monkey was another of the universes most tightly kept secrets until this tell-all exclusive!

If you’ve ever tried to painstakingly deconstruct a towel monkey, in step-by-step meticulous detail, you will have fallen into the same traps as I did. When you eventually try to piece it back together you’re left with a wrinkled towel with a couple of ugly twists resembling more of a twisted sweat rag than a monkey.

It might be hard to believe, but with this first edition book, the elusive towel monkey will suddenly be in your grasp!